This month the IPCC will meet with great publicity to write the political executive summary of their 5th Assessment Report. See Vincent Gray on the background to these here. David Rose at the Mail on Sunday questions how they got it all so wrong.”Climate change sceptics are more outspoken. Dr Benny Peiser, of the Global Warming Policy Foundation, described the leaked report as a ‘staggering concoction of confusion, speculation and sheer ignorance’.

Buying “a pig in a poke” refers to buying an unseen piglet in a sack. The piglet was actually a cat, so when you opened the sack after purchase “the cat was out of the bag.”

Governments bought the Intergovernmental Panel on Climate Change (IPCC) ‘pig’ ‘that human CO2 was causing global warming wrapped in the ‘poke’ of their Reports. IPCC assured buyers it was a pig with 90+ percent certainty.

They fooled governments and media four times now they offer a new poke in Assessment Report 5 (AR5), but with 95 percent certainty it’s a pig. This is despite the fact that the cat is already out of the bag. Their predictions have failed. For 17 years global temperatures have declined while CO2 levels continue to increase. Arctic summer ice, supposedly all gone by 2013 has recovered by 60 percent in one year. Severe weather has not increased. Damage done by policies already implemented, such as green jobs and alternate energies, is already evident. Newspaper coverage declined dramatically as people sense problems even if they don’t understand (Figure 1). Decline followed the peak created by Gore’s false fantasy An Inconvenient Truth. 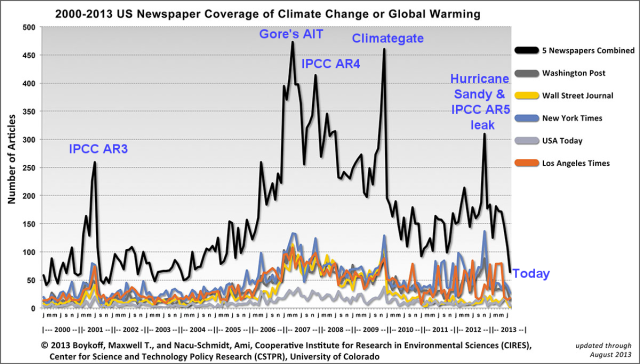 Instead of acknowledging error, the IPCC [tries] to defend the indefensible. This alone warrants disbanding of the agency. END_OF_DOCUMENT_TOKEN_TO_BE_REPLACED