Christians worry too much, relying on their own understandings and accepting the misinformation barrage.God has a simple logical proof as well as his word that disproves the reality of the whole of the climate alarmism.

The latest leaked draft IPCC report AR5 attempts to cover over their previous failed scary projections by offering “trust me it will get worse”. Unfortunately science in the climate arena has largely abandoned truth for advocacy and PhD student models. This is no comfort to those who have come to believe their island homes will swamped or other speculative alarmist scenarios.

God has his answers:

Firstly for us to try to reduce the global temperature by only 1/20 of a degree would cost 4/5ths of the worlds productive output. What sort  of God do we have that would put us in that position? This chart is based on accepted science referred to on the 50 to 1 site: 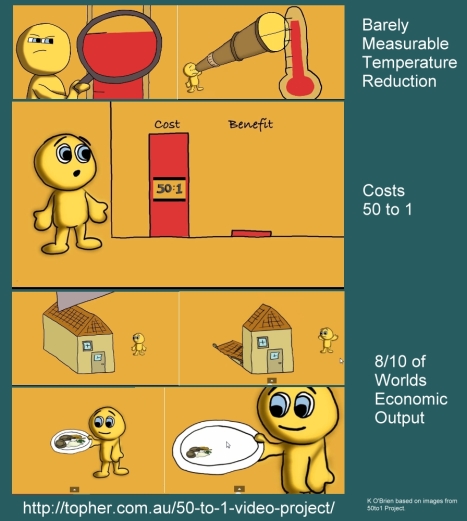 Secondly we don’t have the world-wide productive capacity or land to enable a switch to biofuels, nor are wind farms or solar panels sufficient. Renewable energy is more aspirational than real. Here it is described as a disaster: it should be described as totally impossible on a global scale. Can we trade topsoil for fuel oil? Where do we get scarce phosphorus for future food crops? God does not expect us to beggar ourselves or our neighbours to produce motor fuel.

Thirdly the switch to renewable energy brings great injustice. Who is to bear the rising food prices and resulting famines? Our God is a God of justice so this is against Gods’ will.

The solution that fits all this: we will adapt to the natural climate changes, the islands will not sink unless supporting water reservoirs are used up, coral will still grow up to sea level; the earth has an unmeasurable equilibrium which each of us will find different in our own lifetimes.

There is energy. God hasn’t abandoned His every growing people to a world without adequate agreeable energy. Nuclear fuel has got a bad reputation because the electric power industry preferred to use uranium to provide a by-product for atomic weapons.

Thorium is no use for bomb making nor popular with terrorists but does make good heat and hence electricity. While it is radioactive, you can hold it safely in your hand. It is now being used in low temperature reactors which cannot explode or do a Chernobyl. The reactors have the potential for factory assembly for neighbourhood use and the fuel is plentiful. Trust God to have provided even before we were aware of our needs.