The UN International Panel on Climate Change (IPCC) has prepared a final draft of an updated assesment, AR5. That draft has been leaked worldwide as it shows data that strongly suggests real cooling. Previous leaked emails from some principal climate ‘scientists’ showed concerns that the data wasn’t matching up to their models with a lack of warming, despite their wishes.

Whaleoil has reported the leak and refers to James Delingpole at The Telegraph.  Another, Watts Up With That, reports in much greater detail as well as providing sources.  Here is a reproduction of an original page from the AR5 draftt report that is causing much excitement. 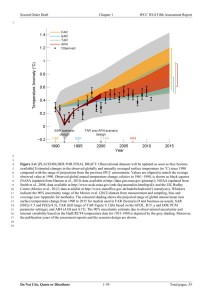 My modified view of the figure is below. Click on each for a larger view. 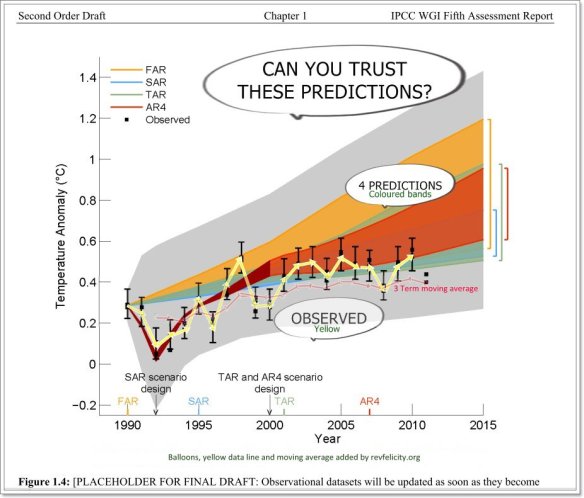 The observations have been joined in yellow and clearly they are lying at the bottom of the figure. Watts comments on the grey model being discredited and the observations barely make it into the AR4 model too. If this is warming, it is hardly measurable and visually, ignoring the confidence bands, it looks like it is heading in the cooler direction. Can you base public policy on such data?

The added three-year moving average shows all the observations below the models except the grey. If this was a stock market chart it would be tempting to take a short position on a market decline. Another couple of declining data points would seal that view.

How trustworthy are the models? This is the first time I have seen these and they are disturbing in their simplicity. You can almost put a ruler along the tops and bottoms of each of the 4 models’ ranges shown. That means that the projections are near linear. What is to change that? Are we seeing a lack of commonsense demonstrated: surely the model makers are not saying that they expect the climate to keep on warming continuously at a defined rate? If so, what sort of delusional disorder are they suffering from? The corollary from their models is, if they are believed to be true, we may already be facing an unstoppable disaster. Do the model makers really believe that? Can Christians really believe that?

There is an another explanation, that the models are just that and some enjoy crafting them with their bits and bytes. Others, using them, seek then to maintain the position of Canutes to appear to stop the fearful unknown process of the scenario before them. This is a recipe for political control on a grand scale. Is that what is driving this? Also there is a lot of global corporate money to be made from such control, which brings with it the rents from resources. It will not be the richest who will be paying such rents. The green watermelons who publicly despise such corporates have also  taken this on as a cause for action as fits their communist origins and belief in controlled order.

Has justice fled or been redefined so that children are even denied medicine because neighbouring trees provide shelter for other creatures.

God made all, but made people in the image of God. I do not believe he loves any tree more than any single hair on any human head.